Believe it or not, the title of today’s blog is the title of my narrative essay for the English Composition course I’m taking from Southern New Hampshire University. The assignment was to write a narrative essay about an experience in which I later questioned my actions. As I feel every experience (even the tough ones) have taught me valuable lessons and I try my best to move forward and not live in the past, I had trouble thinking of such an instance. Thankfully, I came up with one particular experience that seemed essay-worthy. Much to my surprise, joy, and relief, I received a 200/200 on my final narrative essay! So here it is in all it’s flaming bacon glory…

Sometimes instances that make me question my actions crawl like a hazy fog across time, and it takes a while for me to figure out the lesson I was supposed to learn. On the contrary, some instances, my questionable actions, and their results happen with the speed and clarity of a firework shooting into the sky. One such brief but memorable instance that made me question my actions was when I decided to grill raw bacon directly on the slats of my outdoor gas grill. Because of my actions, I experienced surprise at how quickly the strips lit on fire, anxiety that I had done something that had the potential to cause injury, and the realization that acting impulsively is unwise in certain situations.

Though it makes sense to me now, the way the strips of bacon incinerated in bright flames caught me off-guard when it happened. The reason I even attempted to cook them on the grill was that when I cook bacon inside, it is always a greasy, smoky mess. I have tried frying bacon in a pan atop the stove, cooking it upon my griddle pan, and even baking it in the oven, but there is always a grease trail to clean up and smoke alarms to reset afterward. Fortunately, (or so I believed at the time) I thought up a solution one lovely summer morning. It happened when I went out on my deck to fill my birdfeeders and caught sight of my little propane grill. In my creative and slightly naive mind, I felt that putting the raw bacon on the slats of the gas grill would not only eliminate a greasy indoor mess, it would also put classy grill marks on the strips. To that end, I happily lit the grill, brought out the bacon on a plate, gave myself a pat on the back for cleverness and proceeded to lay a few pieces on the slats. Within moments, the strips flared up into flames as the almost pure fat of the bacon caught fire before my surprised eyes.

As I jumped back wide-eyed from the unexpected flaming bacon, I realized I had just done something quite dangerous. If there had been residual grease in the grill, I would have had a bigger fire and might have burned myself. Luckily, I never allow my daughters to be too close when I am grilling, but if they had been anywhere near, they could have been hurt too. Even though I did not immediately think to shut off the gas on my grill, the bacon burnt into nothingness so quickly, I was safe from the further possibility of injury. To this day, I can still see and feel those flames, smell the burnt grease, and remember how bewildered and stupid I felt.

Looking back, I wonder what I was thinking acting so impulsively by placing fatty bacon over open flame and I know how fortunate I am that no one was injured, Though now I am not sure why I thought the bacon was sturdy enough to survive being directly on the heat of the slats, at the time, it seemed logical. Upon deeper reflection, I realize the correct thing to do would have been to put the bacon on a piece of foil placed over the slats. Using foil under the bacon would have kept the grease away from the gas flames while still accomplishing my desired task of cooking bacon outside away from smoke alarms.

Overall, despite my shock at the instant flames, concern that I almost hurt myself, and embarrassment at my impulsive actions I am able to look back on the bacon grilling incident and laugh. I admit that I am somewhat accident-prone and by now, I have learned that it is better to learn, laugh and move on than to repeat mistakes, grumble, and wallow in the past. 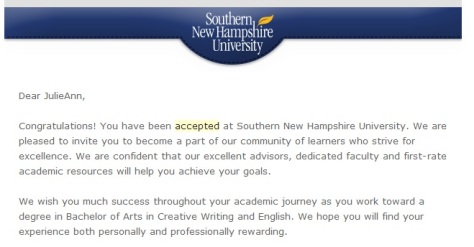 This past trip to New England with my daughters was the best trip I’ve had so far! Being with my girls for an entire week was great and they got to meet most of my friends in Amesbury, MA. There was even a miracle that proved to me that anything really is possible when you’re determined enough! It also showed me that when the time is right, everything has a way of falling into place in ways even better than you imagined.

I’m always sad to leave New England at the end of my trips but each visit convinces me even more that my future lies out that way. To further my pursuit of that future, I’ve decided to pursue an online degree from Southern New Hampshire University. My current endeavor is a Bachelor of Arts in Creative Writing and English but that might change as I figure out the best degree to accomplish my goals.

I had the opportunity to go to college right out of high school but I chose not to because I was tired of school and wanted to continue earning money in the workforce. Almost twenty years later, I’m a single mom who is making a living as a freelance ghost writer and I’m proud of my accomplishments. I know I can go so much further though and I feel that college will open up new avenues for my development as a writer and a person.

I chose SNHU because I already love New England, want to make my life out there and because they keep showing their commercials on my TV stations in NY. Everyone I’ve dealt with at SNHU has been very helpful and supportive and I’m excited about this new chapter in my life! I’ve enrolled in two courses for the first semester and while I’m certain adding that into my already busy life will be a challenge, I’m certain that I can do it. I’ve already done so many things I never imagined I could, what’s one more?