I’ve been writing all day aside from taking Jazz for a walk and working on her sit, stay, come skills so I’m too tired to write much more. Instead, I’ll share the pictures I took today to document how my loopy lovables keep my life interesting. 🙂 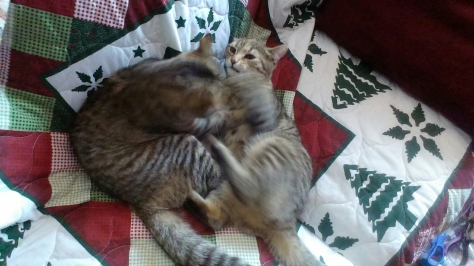 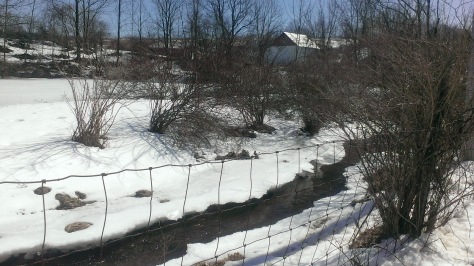 Roadside stream near my house

March in the Northeast U.S. is a month full of Mama Nature’s mood swings. She’s not quite ready to let us have warm, sunny days regularly so she tosses one in here and there to tease us amid cold temperatures and scattered snow flurries. That’s okay though because I make sure to enjoy every moment of the nicer days by going outside on walks, while snuggling inside on the less nice  days.

Thursday is the official “First Day of Spring” but truly, that’s an optimistic notion. I’d be extremely pleased if it was suddenly 55 degrees and sunny out and the muddy, snowy bog that is my yard instantly dried up and sprung to life with green grass. No wait, nix the grass, I’m not ready to mow yet. Flowers will do nicely instead! I’m really just tired of being cold and waking up to dark mornings. The dark mornings will slowly get lighter again as the month progresses but wow, the time change makes it hard to get up early all over again!

I took Jazzmin on a pleasant, two-mile walk this afternoon and was happy to discover that I’m not terribly out of shape from being sick and mostly in bed for the past couple weeks. My legs do still have muscles and my lungs still work up to capacity! A grand discovery indeed! We saw a young fox frolicking in the field during our walk and I grinned from ear to ear because foxes are always a sign of good luck! When he saw us he immediately dashed across the road and into the woods out of sight but I thanked the powers that be for sending me such a positive sign.

The fox was a sign of continuing luck and I welcome it with an open heart, mind and spirit. I’ve had several promising changes in my freelance writing career today and it’s a grand boost to my confidence! This blog is where I ramble about whatever I like and it’s very freeing but it’s also nice to know what my professional writing is appreciated and sought after. Spring has sprung with positive omens and soon it will pop and flourish with warmer days, blooming flowers and leaves on trees!

Not exactly inviting an outdoor gathering…

Today I was writing about all the fun things to experience in sunny south Florida while I huddled inside my drafty house under blankets and in layers of clothing. The snow that fell yesterday and this morning is the consistency of sand but the completely wrong temperature! I acknowledge that sand can be cold but even so, I find it far more useful than snow.

While the snow reminded me of sand in texture and weight, there was definitely no warmth to it. I wrote about golden beaches of sparkling sand aside clear ocean waters even as my entire yard was covered with a foot of snow. Oh how I wish writing about a tropical place could teleport me there! The written word is capable of amazing things but it’s yet to magically transport me to the exotic destinations I write about. If it did, you can bet I’d start with somewhere like here…

It’s only January and where I live that means there’s still a good 4-5 months of winter left. I haven’t been able to escape to somewhere warm amid this winter cold since my daughters were much younger and we took a trip to Disney World with my mother. Being in bright Florida sunshine and blue sky in the middle of February was a splendid treat for all of us and I promised the girls we’d do it again someday. That’s a promise I refuse to break, it’s just taking me longer than I expected to fulfill.

Getting back into my regular routine and career of freelance ghost writing has required cleaning the dust that gathered in my creative mind during the holidays. It was nice not having to worry about working every single day and meeting deadlines but now that the festive freedom of the season is over, it’s time to return to reality. I do so love my job as a writer though and working at something I’m passionate about is invigorating for me. Still, I wouldn’t mind a nice, warm little holiday getaway this winter to tide me over until the green life of spring returns in May…or thereabouts.

Powdery and sparkly but not warm!

Quite often I write about how arches, wainscoting, stain glass, moulding, materials and colors of doors and doorways can enhance the interior design of a room. You’ll have to take my word on this because I can’t take credit for any of those ghost blogging articles. I have a great appreciation for beautiful doorways and grand entrances. In a home, they’re portals into another room. In life, they can be a hindrance or an aid on the journey of life.

On that theme, I’m revisiting and reposting a blog from my Corbin Creations blog again tonight. It’s rather late and I don’t think I’m coherent enough to plunk out a new and meaningful post. Rereading this one really turned the tumblers on some of my mental and emotional locks so perhaps it can do the same for you…

We’ve all done it. Walked up to a door and tried to pull on it when it’s a push open or push on it when it’s a pull open. It can be embarrassing, especially if we do it with the same door more than once. Why can’t we do it right the first time? Why didn’t we pay attention? How could we keep forgetting?

Doorways and passages in the journey of life are no different. There are those doors that we keep pushing on with all our might but they refuse to budge. We try a different approach by pulling on the door but it still won’t give and yet the handle turns meaning that the door is unlocked. Then we start to wonder why that particular door is locked to us, especially if it’s one we’re sure should be open to us by now. Where did we go wrong? Will the door open for someone else? Or is the timing just wrong and we have to wait a while longer?

Sometimes the best course of action for such stubborn doors is to just move on and try a different doorway. This doesn’t mean we can’t someday come back to that door and test it again but our journey should not center around something that is barring our path. Some doorways will be wide open to us and some of us will step right through those fearlessly while others will wonder why they’re open. Is it a trick? What lies beyond the door? What if we don’t like what we find? Doorways are always open to us for a reason and the longer we stand there succumbing to doubt and fear the more likely it is that the door will close on us and we’ll never get our answers.

Fear can cripple us and prevent us from ever taking those forward steps that will bring us to a more promising future. We stand there holding onto a door handle pulling, pushing and wiggling it because we’re afraid that letting go will undo all the progress we’ve made to open that door, even if we’ve made no real progress at all. There comes a point when we just have to let go, drop our hands, wipe the sweat from our palms and turn a different direction. Look for another door that speaks to you and try opening it and who knows what you’ll find. Not every door will open to you but those that do are meant to be walked through. Even if you have to close your eyes to do it, step through that open doorway and experience what lies beyond.

In the back seat of my Matrix on the way to Boston in November, 2012

I am not a natural redhead. This is made evident by my dark brown eyebrows and dark roots that grow in every 2-3 weeks. Most of the time I’m more like a calico cat, with my hair a mixture of the last several colors I’ve dyed it. Some colors grab better than others and some fade so there’s always a unique mixture of red, brown and currently, burgundy dancing through my tresses. I color my hair myself because my indecisiveness would be a rather expensive salon habit.

I don’t like to go along with the crowd, never have. My family moved from the country into a rather large suburban school district when I was 13. It was a huge adjustment for a shy, semi-reclusive girl like myself. One of my first days in school a gaggle of popular girls bounced over to where I was sitting in the cafeteria and asked me if I liked New Kids on the Block. I said no and their perfect little noses wrinkled in disdain while their doe-eyes widened in surprise. From that day on I was an outsider.

In high school I was called a witch because I liked reading fantasy novels and wearing dragon-themed jewelry now and then. I was never impressed by boys teasing me or rough housing near me in an attempt to flirt with and impress me. That’s how I earned the “rhymes with witch” moniker. I was happy when high school ended and I saw almost none of those people ever again.

I’m genuine, the real deal, a no-nonsense chick who says what’s on her mind. Quite often my bluntness and sarcasm catch people off guard. I am also a nice girl who was raised with manners and has never forgotten them. When I say please and thank you, I mean it.

I shall reiterate what I said in Writing Every Word. When I post something, whether it’s a Tweet, Facebook status or DM, I’ve taken the time to write it out. I don’t auto-follow or auto-unfollow, I take the time to click on the appropriate buttons. My standard “Thanks for the follow! I followed back :)” is always typed out in that moment and I try to hashtag something relevant to the new follower.

Now that I have a published e-book on Nook and Kindle, I’ve entered the fun world of marketing my story. I read tweets all day long of other authors advertising their books and my goal is to stand out from the crowd. I’m sure that’s every author’s goal. I will schedule tweets but they won’t be the same thing over and over. I won’t be paying anyone to help me advertise because no matter how much they promise to speak in my personal voice, they can’t. There’s only one me. I’m a paid ghost writer as a side job, I’m not about to pay someone else to ghost write for me.

A book teaser I’m working on

One more thing: my tweets and posts will never be only about my book or my blog. Last night’s tweets were mostly about the Boston Bruins playing in The Stanley Cup Finals. I’m a human, not a robot and I don’t exist solely to promote my work. I exist to interact, be social and discuss all sorts of topics, not just writing. Perhaps this goes against tons of marketing “rules” but rules and I don’t get along sometimes. The occasional fiery redness of my hair might come from a bottle, but the fire and feistiness within me is 100% natural!