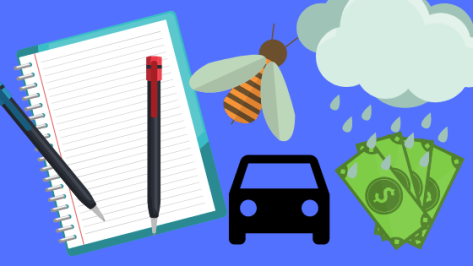 Now that we’re two days into 2019 and I’ve once again forgotten to buy new calendars before the year change, it seems like a good time to reflect on the challenges of 2018.

In the pre-spring of 2018, my basement flooded because my sump pump stopped working correctly. I managed to repair it temporarily and get the water out of my basement, but then had to throw out a lot of items that had been on the basement floor. Considering that I hadn’t needed those items in the almost seventh years I’d lived in the house, I obviously didn’t need them.

Then my kitchen drain wasn’t draining properly and my attempts to snake it failed to clear the clog. Called a plumber and they discovered that my line to the septic tank was partially broken, thus things weren’t draining properly. So my issues cost much more than a simple snaking, but avoided problems in the future. Plus I got my sump pump replaced with a smaller, safer unit.

After that came a challenge I’d known was coming, getting the transmission on my Toyota Matrix replaced. That cost more than expected, but with a new clutch and transmission now it should last a good many more years.

Just when I thought I might be in the clear, the water pressure in my house took a significant dive. It turned out that the line from my well to the house was leaking. So once again, plumbers dug up my yard and fixed the problem and once again I faced a large and unexpected plumbing bill. But the upside is that I have great water flow and pressure now and know that my well gets plenty of water.

I got a brief reprieve from challenges until late summer when wasps suddenly started appearing in large numbers in my bedroom. I discovered they’d bored right through the wall and into my closet. I then had to spray my closet with Raid and plug the hole with expanding foam.

During that traumatic escapade, the Raid damaged items in my closet and it was then filled with dead wasps I needed to clean out. So I had to clean out and reorganized my closet and that’s something I’ve needed to do since I moved in. While I didn’t enjoy that experience in the least, I do like having a tidier closet that’s easy to store things in.

So while I wish that the challenges of 2018 hadn’t been quite so financially expensive, I certainly learned a lot and was forced to make long overdue changes. Sometimes the universe gets tired of sending me subtle hints that I miss and has to send bigger slaps upside the head. This year, I’m keeping my eyes open for those subtle hints in the hopes of avoiding any bigger issues that arise.

Last week I received another remind that I’m capable of so much more than I give myself credit for sometimes. It was another cold winter morning when I started my car to warm it up, turned on the defroster and cranked the blower to melt the ice on the windshield. Much to my dismay, I discovered that the blower wasn’t working. The heater was still making heat, but the fan wasn’t blowing it out.

I’d planned to visit my mom that day and I continued with the plan even though it meant driving a car with minimal heat. When I was moving, the air would flow through and heat came out the vents, but when I stopped, it became very cold in my car.

On the drive to my mom’s, I worried about how much it would cost to get the blower fixed in my car. My Matrix is far more reliable than my old Explorer was, but having something repaired in it was money I wasn’t planning to spend at that point.

By the time I reached my mom’s house, I was ecstatic to get inside where there was heat. As soon as my fingers thawed, I texted my close friend and told him my blower stopped working. He responded by suggesting I check the fuse because my car wasn’t that old and the blower shouldn’t be broken. I’d never thought about checking the fuse. In fact, I’d forgotten my car had fuses because I’d never dealt with fuses in any of my vehicles before.

My friend texted me a link to some videos that explained how to find and replace the fuses in my car and I realized it was something I could at least try to do. I donned my oldest brother’s old Carhartt jacket because it was more appropriate for car work that involved crawling around on my floor. My brother is over 6 feet tall and I’m only 5’5” so it was a bit large on me, but I knew I’d still be able to work in it.

Now in more appropriate car repair attire, I headed out to my car as it sat parked in my mom’s snowy driveway. I crawled onto the floor of the driver’s side and had to twist over onto my back to find the fuse box mounted up underneath the plastic overhang below the steering wheel. I had to lay completely on my back and cram my hands up under the dash to pull the fuse box cover off. I wondered how someone bigger than I would’ve accomplished such a task without becoming stuck on the car floor!

Once I had the fuse box cover off, I went back inside the warm house and had to decipher what the guide on it was telling me so I could find the location of the blower fuse. After much studying, I finally found the right spot, and headed back out with a pair of my small jewelry pliers in hand so I could pull out the fuse. I crawled back into my car, laid on my back, reached my hands up under the dash…and realized I couldn’t get the right angle on the fuse to yank it out with the pliers.

Refusing to give up when I’d gone that far, I went back inside, fetched my bent nose jewelry pliers and contorted my body into position again on the floor. That time I was able to get a hold of the tiny fuse and pull it free to examine it. I’d seen in the video what a blown fuse looked like and the fuse I pulled out was in perfect condition. Dismayed by the discover that it apparently wasn’t a fuse problem with my blower, I put the fuse back in its spot, snapped the fuse box cover back on and moved to sit in the driver’s seat.

On a whim, I put the car in accessory mode and turned the blower dial. Much to my delight, air started blowing out! The fuse wasn’t blown but somehow my tinkering with it had fixed the issue and the blower worked again! I was so proud of myself I almost squealed with delight, but I decided that might’ve been a bit over the top and instead did a little happy car seat dance.

That’s the first time I’ve done more to my car than fill it with gas, top off the washer fluid, or get it washed and it showed me that I’m capable of so much more than I believe sometimes. Now that I know where that fuse box is and how to replace fuses, that knowledge can save me money and frustration in the future, which is always a good thing! Not only that, but I upped my cool chick points too.

If you found this post helpful, check out my furnace troubleshooting post about when my unit wasn’t producing heat.