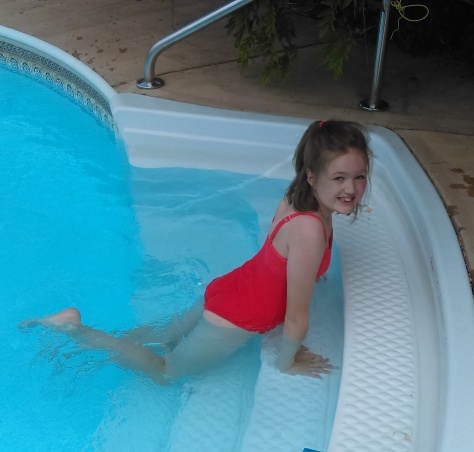 My youngest daughter, Jaycie, turns 10 today and with every birthday, I wonder where the time went! Jaycie is a sweet soul and she makes a memorable, positive impression on everyone she meets. She certainly made some impressions on my insides when I was pregnant with her and she made sure her entrance into the world was unforgettable.

As Jaycie is my second child, I was better prepared for what labor and child birth entailed. I was much calmer and more in control than I’d been while giving birth to Jordan. I was also able to get an epidural with Jaycie, whereas I hadn’t been able to get one with Jordan for various reasons. All due respect to the women who do childbirth without medications, but I’m just not one of them. Even with the epidural, I still felt some pain, but as the drugs were at max dosage, I managed it. I can’t even imagine what the pain level would have been without the drugs!

What made Jaycie’s birth truly memorable was that she kicked and hiccupped through at least the last hour of labor. I’ll be telling the story forever about how the nurses found it fascinating and amusing that Jaycie kicked and hiccupped through all my pushing. They just couldn’t seem to fathom how she was able to do that while under so much pressure. It was just another indication of how unique Jaycie is and gave me fair warning that she was not like “normal” children.

When Jaycie was finally out, I was ecstatic that I had a second daughter and surprised that she looked nothing like her older sister. I’d expected another little Jordan but Jaycie wasn’t that, never will be that and that’s fine with me! Jaycie was very active when she was just born and nearly rolled out of the plastic bassinet they put her in. I thought for sure she was going to do everything early because she was obviously a fighter.

As soon as she figured out how to smile, Jaycie woke up every single day as a smiling baby. She’s never thrown a temper tantrum and I’ve only seen her slightly mad once when I made her eat summer squash. There isn’t a mean bone in my Jaycie Bear’s body and there’s an innocence about her that everyone notices. When we go out to playgrounds, parks or swimming pools, she happily introduces herself to any children she meets and asks their names. I love that she’s outgoing and that’s another thing that makes her different from Jordan and I.

As it turned out, Jaycie did almost everything much later than other children and she’s still catching up, but that’s okay. She’s a very intelligent, clever, kind and loving child with endless creativity. I’m grateful every day for both my girls and I can’t imagine my life without my amazing hiccupping kicker!