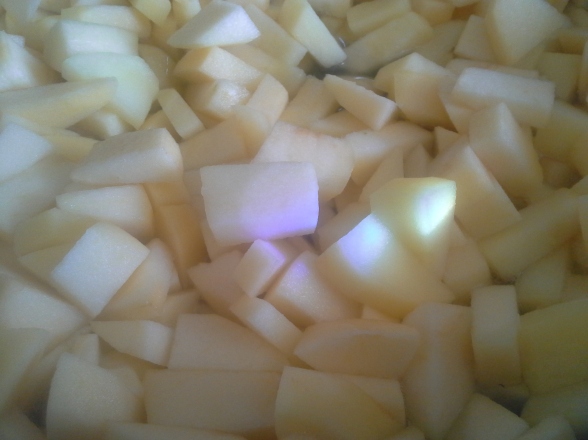 If I could, I’d spend all day baking and cooking in the kitchen. Well, all day in the cold, snowy weather at least. In the nicer weather I prefer working after it gets dark so I don’t feel like I’m missing a beautiful day outside. I do that often enough when I’m writing freelance.

The kitchen of my dreams that I discussed in my previous post might seem a bit extravagant I suppose but believe me, I’d make great use of everything in it! The kitchen in my current house isn’t overly big but it’s set up pretty well for baking. I have a nice peninsula on one side that I can use as a baking prep area when it isn’t covered with school papers and design magazines. The countertop space otherwise isn’t overly plentiful and with my coffee maker, toaster oven, spice rack, baking canisters and dish rack on them, the surface area is greatly diminished. I make do with the space I have though and have learned to consolidate and tuck away.

The secret ingredient in my applesauce.

My range is a nice gas unit with reliable burners and ample oven space for two sheets of cookies. In my previous home there was an electric range and I was worried about using gas because of my occasional mishaps with open flames. I got the hang of using gas pretty quick though and I love how much easier it is to control the temperature on the burners. Thankfully my microwave is a space-saving unit above the oven so it doesn’t use up any premium counter space. Oddly enough the microwave is black but the range, dishwasher and previous refrigerator were white.

My least favorite part about cooking and baking is washing the dishes. You didn’t read wrong, I did just say I had a dishwasher. However, I also have sulfur water and it’s not very effective at removing dishwasher detergent from plates, glasses and silverware. So instead I wash everything by hand because then there isn’t nasty film all over everything I eat off of. My nice big refrigerator died this spring and as I couldn’t afford to replace it with another big unit, I bought a small fridge/freezer combo similar to what you’d find in a hotel. It was supposed to be a temporary fix but I’ve been living with it for six months. Putting groceries away is kind of like a puzzle but I’ve got a system now. Hopefully I’ll be getting a new, grown-up size fridge in the near future. In the meantime, I make do. 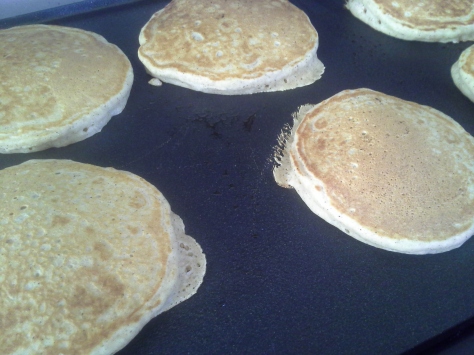 My latest batch of fluffy pancakes!

The size of my kitchen doesn’t prohibit me from making what I love. I’m always mixing up cookies, muffins, soft pretzels, bread and cakes. I love to cook fish, rice, veggies, pasta, tacos, you name it! Would I love more area for my prep work? Or one of those neat fridges with the freezer on the bottom? Or enough counterspace to keep my food processor, blender and mixer out? Or a dishwasher that washed dishes? Of course! I’d be in paradise in a nice big kitchen. I like the ones where the burners are in the middle of the island so people can watch what you’re making. I could pretend I have my own cooking show when I’m entertaining! That would require a social life and friends to entertain as well as the kitchen, but oh well. My dream, my personal cooking show.

The picture below is similar to my kitchen layout (with way nicer appliances) only the island in this one is a peninsula against the wall in mine.

Below is an example of a kitchen that’s a bit over the top even for me. Talk about open flames!